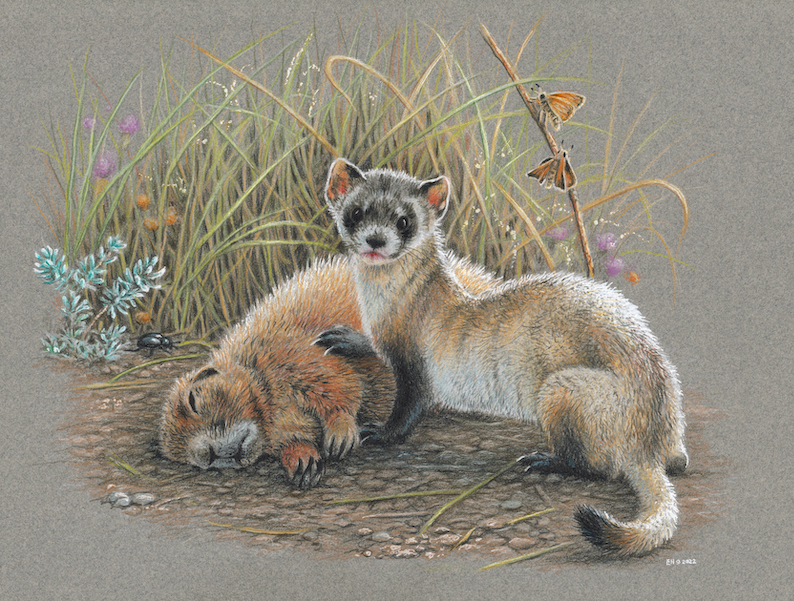 I created a portrait of Elizabeth Ann to support the recovery of the Black-Footed Ferret, the rarest North American mammal and once thought to be extinct.

With only seven founders, the living population of Black-Footed Ferrets have limited genetic diversity. In the 1980’s, cells from an eighth ferret, Willa, who has no living descendants, were stored in San Diego Zoo Wildlife Alliance’s Frozen Zoo. In 2020, those cells were used to produce Elizabeth Ann…a living twin of Willa…which made headlines around the world as a major milestone in the use of advanced genomic technologies in conservation.

This successful effort was a collaboration among a number of groups, including Revive and Restore, the U.S. Fish and Wildlife Service, Viagen, and the San Diego Zoo Wildlife Alliance.

My drawing of Elizabeth Ann is on exhibit at the U.S. Fish and Wildlife’s National Black-Footed Ferret Conservation Center near Fort Collins, Colorado, where Elizabeth Ann herself is housed with the Center’s ferret breeding colony. The drawing will eventually be housed at the Smithsonian Museum in Washington, D.C., along with other materials documenting this major milestone and the successes of the program.

All images on this site are copyrighted and may not be copied reproduced, redistributed, manipulated, projected, used or altered in any way without the prior express written permission of the owner. Website by Brandworx.